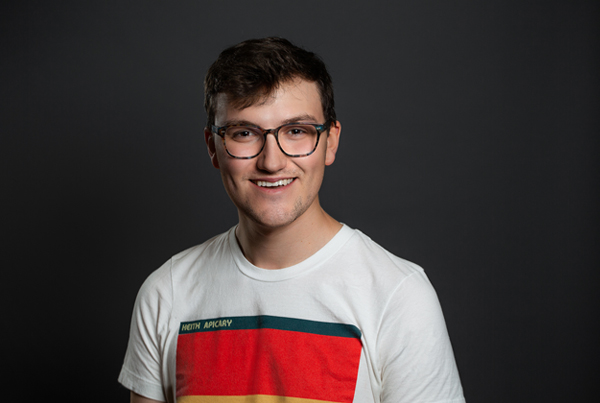 Simon grew up watching Tex Avery cartoons and reading his dad’s comic books. At age nine, he founded the Robot Fan Club and started drawing robots on sticker paper. According to Simon he’s currently still acting as its sole member.
Simon has received a fancy art school education, graduating from the Mohawk College Integrated Animation program in 2014 and the OCAD University illustration program in 2018. In testament to his skills, he is already teaching graphic design courses at Mohawk College. He also currently operates Today’s Inspiration Press, a small-press publisher specializing in illustration art from the mid-20th century.
Simon has had a big impact here at Muse, delivering design thinking and expanding our ability to offer clients animation, illustration and motion graphics. We’re still waiting to find out what he can’t do.
Simon lives on a pretty, winding street in downtown Hamilton with his partner (and fellow Muse) Phoebe, a dog called Winona and a geriatric cat called Anjelica.